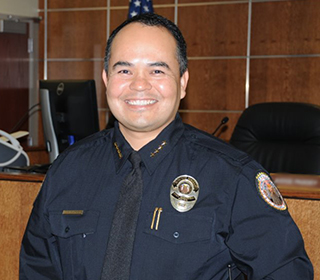 Fort McDowell Yavapai Nation Chief of Police Jesse Crabtree has been with the Police Department since the Department’s inception in 1997.  He graduated from the Northern Arizona University with a Bachelors of Science degree in Criminal Justice in 1995 and a Master of Administration in 2008.  He is also a graduate of the Federal Law Enforcement Training Center in Glynco, Georgia.

During his tenure with the Fort McDowell Police Department, he has worked as a Patrol Sergeant, Community Action Sergeant, Detective Sergeant, Acting Patrol Lieutenant and a prior assignment as Chief of Police.

In emergency situations always call 9-1-1. For other police related matters call the Fort McDowell Police Department at 480-837-1091, or contact Acting Chief of Police directly at jcrabtree@fmyn.org or at (480) 789-7511.